EffectiV HVAC » Air Distribution Blog » The ‘Most Adjustable’ Round Diffuser?
Look Up to Increase the Value of Your Commercial Real Estate Property
New Plenum Options: Cable Operated Dampers and Insulation

The ‘Most Adjustable’ Round Diffuser?

Most large commercial air distribution manufacturers have their particular ceiling round diffuser model. Although some have fixed air patterns while others are adjustable, they all look very similar to one another.

EffectiV HVAC is a line of specialty diffusers only. Each product addresses special architectural, comfort and energy efficiency needs. Therefore, we often respond to the question: Why the DCG? Alright, it’s all aluminum, it’s adjustable, and it’s one of the best looking round diffusers out there. But still, what makes it so unique?

The answer is performance! DCG has a high level of adjustability. Like all standard adjustable round diffusers, DCG allows for a vertical adjustment of the airflow. But thanks to the well-engineered design, the DCG can be gradually adjusted from a full horizontal airflow to a downward vertical blast.

In air conditioning and ventilation modes, the DCG round diffuser can be adjusted in horizontal mode to supply fresh air in 360 degrees airflow, while leveraging the Coanda effect when installed in closed ceilings.

In addition, while in in heating mode, the DCG can be adjusted to send the air downward in a more vertical jet. The DCG’s jet in full vertical mode can ensure heating comfort even when installed in very high ceilings.

Moreover, DCG’s airflow is adjusted by rotating the core clockwise or counter-clockwise, moving it up or down. Therefore any level vertical adjustment is available in order to optimize occupants’ level of comfort.

A Closer Look into DCG’s Performance

Let’s analyze the DCG’s performance using a simple example. Let’s take the DCG for a 10 inches duct diameter supplying 400 cfm of isothermal air. The data below is for a full horizontal adjustment of the core. 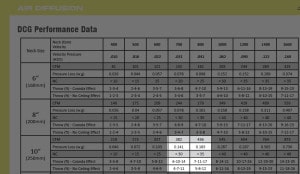 As shown in the image above, the performance table shows values for 382 cfm and 436 cfm. We can use both values and extrapolate values in between them. In order to extrapolate a discrete value, we assume that we are dealing with linear curves. It is a safe assumption given the small portion of data analyzed. The difference between 400 cfm and our two listed values is respectively 18 cfm and 36 cfm. Therefore, we will use a 2/3 – 1/3 ratio to extrapolate.

Using the same formula, we get throw values of:

A few remarks regarding throw values.

For the sake of the example, we have to stay as generic as possible. A study from ASHRAE shows that, in the neck region, the percentage of complaints are significant at and above 50 fpm. This number will obviously be affected by air temperature and turbulence. One thing that’s interesting with the European standard throw values is that we can use a 60 fpm terminal velocity in heating and 40 fpm in air conditioning to measure comfortable throw values.

In our example, the DCG 10″ supplying 400 cfm of isothermal air in its horizontal adjustment will reach terminal velocities of:

We use a different table for downward projection of heated air: 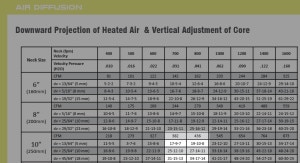 What about air temperature? Again, it is very important to read the performance notes:

Depending on the adjustment of the core, if for instance we supply air at a temperature of 74°F into a 65°F room (delta T 9°F), we will reach 40 fpm terminal velocities at respectively 9, 13 and 16 feet from the diffuser.

Now that you are familiar with the DCG’s performance data and selection process, let’s get back to this article’s main topic:

Is DCG the most adjustable commercial round ceiling diffuser?

Analyzing DCG’s isothermal performance and throws for 40 fpm terminal velocities, we get the following result for the 10″ neck diameter at 400 cfm:

These are extreme numbers. However, keep in mind that DCG’s adjustment is continuous and any desired throw in-between those values can be obtained.